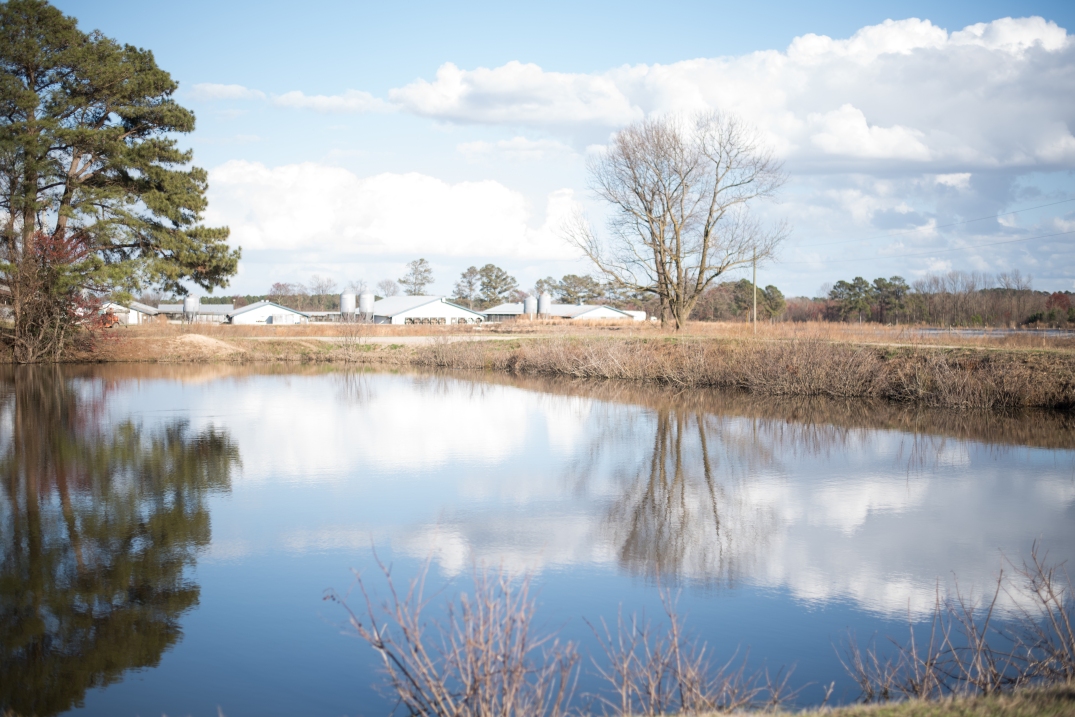 Our farmers deserve praise, not condemnation; and their efficiency should be cause for gratitude, not something for which they are penalized.

How true these words are! However, you will hear a much different story in a Raleigh courtroom. There, lawyers will tell you that farmers deserve condemnation, and what they do on a daily basis should be penalized in the form of a huge lawsuit.

What did they do to deserve such condemnation? They existed.

These farms have been here for decades. The farmers, along with their families, raised and took care of pigs throughout the years.

And now… now, they stand to lose it all.

All because certain people made a judgement and condemned them.

Here is where I get confused. I thought we lived in a society that was promoting a judgement-free zone. But, I guess there is an exception to farmers.

It is OK to judge and condemn them.

It is OK to bully them and attack them.

It is OK to assume who they are—greedy, careless villains.

It is OK to blindly believe what other people say about them—polluters and bad neighbors.

It isn’t OK to give false and misleading facts.

It isn’t OK to sue farmers and take their entire livelihood.

It isn’t OK to judge them when you haven’t even tried to get to know them or understand their practices.

I don’t know why farmers have a bullseye on their backs. I don’t know when it will stop. I don’t know how all the lies got started. What I do know is these farmers don’t deserve it. And I know that I, for one, will stand by them, praise them, and thank them for all they do!

If you have nothing to hide, then why do you have Ag-Gag laws?

If you have nothing to hide, then let the public in to inspect your farm?

If you have nothing to hide….

The thing is, farmers have nothing to hide.

In today’s world farming looks different. We have a lot more technology and things don’t look quite the same as when grandpa did it. One example of this is how we raise animals like pigs and poultry. They are kept in large enclosed barns. The purpose of these enclosed barns is to protect the animals from weather, predators, and diseases. It also allows farmers to provide better care to these animals.

It also tends to “hide” the animals from the public, and many are outraged by this fact. It isn’t that farmers are wanting to hide practices, treatment, or the animals, rather they want to protect them. Unfortunately, many don’t see it like this. There are many statements I have heard over the years by outraged individuals who think farmers have something to hide, but they are wrong. Why? I’m so glad you asked. Here are 5 common statements, and why they are wrong.

1. Biosecurity is just an excuse to prevent the public from seeing the inside of your operation.

It isn’t an excuse. It’s serious business. Ignoring biosecurity will kill hundreds of animals. Biosecurity is the process of preventing diseases from entering a farm. There are many steps taken regarding biosecurity practices. For example, disposable coveralls, hairnets, and boots are often required when visiting a farm. On some farms (those with babies), you even have to shower in and out. Let me tell you, this isn’t done because I think it’s fun,  I do it because I care about the health of the animals. That’s why I will gladly strip all my clothes, hop in a farm shower, and put on oversized coveralls with sopping wet hair to check on and care for those pigs. When a farmer says you can’t come visit because of biosecurity reasons, they are not making excuses. They are protecting their animals. One or two people may not hurt, but if you open the gates it could make a lot of animals sick. If you have a baby, you don’t let everyone and their mother hold it, do you? No. You are careful because you want to protect your child. It is no different on the farm.

2.Ag-Gag laws were created to keep people out and hide things.

Ag-gag laws encourage honesty in employees and protect businesses. These laws are not only poorly named, but they get a bad rap. First of all, the law (in NC at least) covers more than agricultural entities. Nursing homes, daycares, and other businesses are also included. So take out the Ag part. Secondly, they aren’t really gagging anyone. They were put in place to prevent individuals from seeking employment under false pretenses. In other words, you can’t say “hey, I want a job at your turkey farm. I need a job to support myself.” When in reality your motive is “hey I want to get inside your turkey farm, film for months, and then leave.” The law prevents that from happening. It also prevents employees from filming or photographing without the employer’s consent. The thing is, there has been a lot of shady business regarding photos and videos. So many times footage has been edited to make a situation look heinous. The law just helps folks be more honest. So… what if there is abuse on a farm? You report it. As an employee or employer, you need to report immediately. Most larger farms have hotlines available, and employees are trained and encouraged to alert about any abuse. Any good farmer is just as outraged about the abuse of animals as the next person.

3.The public has a right to know what’s going on in those barns.

You’re right. You do have a right to know how your food is raised. We have a duty as farmers to let you know what is going on too. What you do NOT have a right to is waltzing in to a barn and checking it out. You have a right to know how your food is being prepared in a McDonalds, but you don’t just walk to the back and go to inspecting. The same principle applies to a farm. It matters even more on a farm because a lot of times, farm families live right there. You see, a barn is an extension of a home. You don’t go peeping in people’s windows and taking photos without permission at their house, so you shouldn’t do it at their home away from home either. Plain and simple. Finally, a farm is not a petting zoo. So, no you do not have the right to come inspect or pet or play with the animals on a farm. You do have the right to know what is going on though….which brings me to my next point.

4.If what you say is true, then show me a picture or video that isn’t some pretty PR piece.

I’m never sure how to react to this one. Typically, that pretty PR piece referred to is the truth. If you won’t believe the truth, then I don’t know what to tell you. There are so many farmers and organizations that are so transparent with day to day life on the farm because they know farms can’t really have physical visitors, but they can have virtual visitors. What is so frustrating, though are those that refuse to believe what is right in front of them. They only want to look at the negative pictures taken from who knows where. Does abuse happen? Yes, and that makes me sick, but know that most farmers are not that way. Those “PR pieces” are the real deal and are not staged. If I lead you to the water, please drink it. 5.If you aren’t hiding anything, then why put the farm way down a dirt path and put the animals in confinement?

The simple answer to this, is we like to be neighborly and to protect our animals. No matter what type of farm it is, it can smell. Farms just smell like, well farms. So, every effort is made to put farms away from people. As for the confinement bit, as has already been stated, the animals need protecting. The larger barns they stay in are cooler in the summer and warmer in the winter. They are cleaner, encourage better biosecurity, and allow for more individualized care to the animals. It’s not hiding, it’s protecting. Farmers have good reasons for not letting just anyone into their barns. They are not in the entertainment or tourist business. If you have concerns or are just curious, then find a farmer and talk to them. Be respectful and listen to what they have to say. Do farm tours happen? Yes, but a farm’s purpose is to raise animals well…not to give guided tours. Beyond that, there are serious reasons why farmers do not allow the public to come into the farm. Primary reason is to protect the animals. I wish with all my heart the world could experience the life of a farmer, but alas, it cannot be. I promise, though, farmers aren’t hiding. They love their work, and want to share it. Open dialogue coupled with faith and trust goes a long way.

“I’m sweating like a pig” usually means that you are pretty gross and covered in perspiration. The problem, though, is if you were indeed sweating like a pig, you’d be super dry, with not one bead of sweat on your head. You see, pigs don’t sweat. All of a sudden the popular saying becomes problematic. 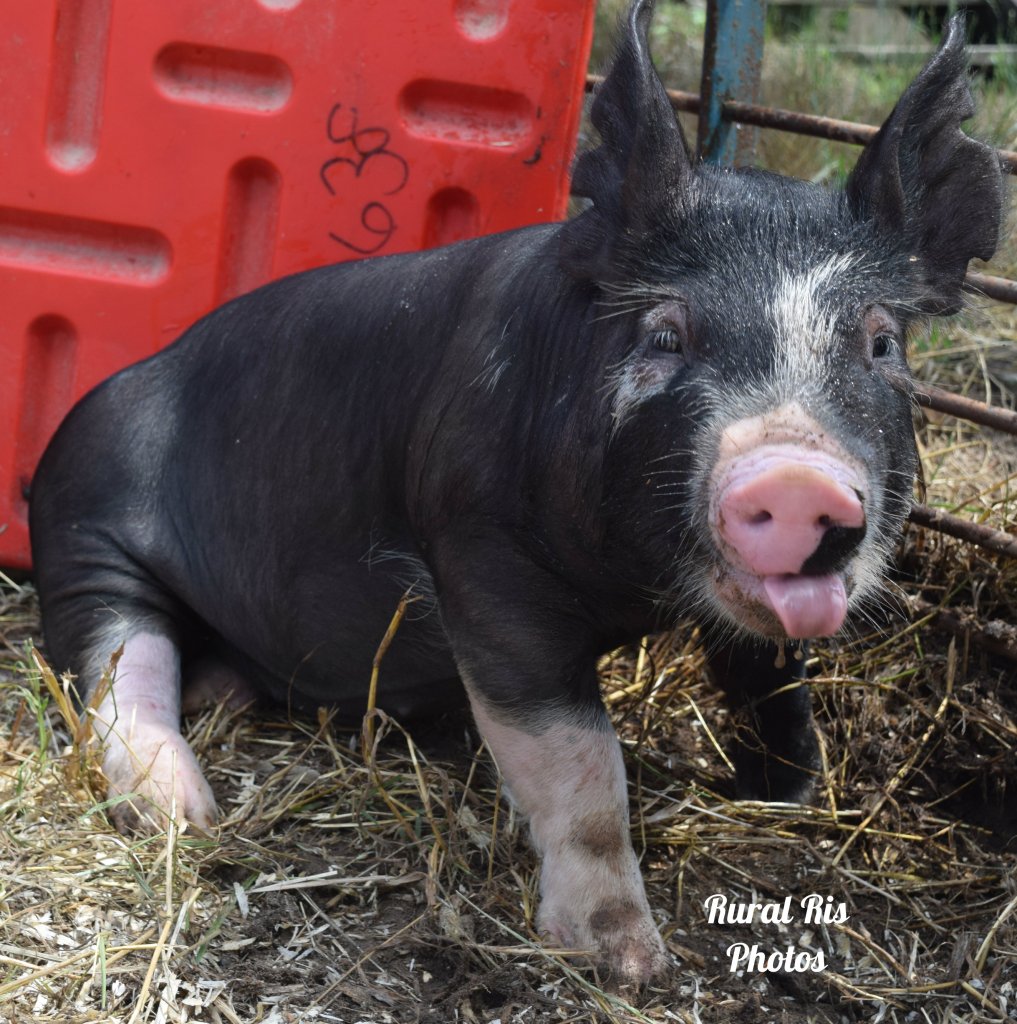 Good news, though. There is some logic behind the phrase. Bad news: there isn’t a definite source. There are a couple of myths about just where it came from.

Some say that the phrase originates with pig iron. When heating up the metal to extreme temperatures, the ore would get hot enough to become liquid. Smelters would watch the metal for signs that it was cool enough to move and not drip everywhere. It was ready when droplets would form on the metal due to the air around it reaching dew point.

Maybe the saying has its origins with pigs, but pigs on a rotisserie. When cooking a hog over an open fire on a rotisserie, the fat from the pig would drip down into the fire. This gave the appearance of the pig sweating.

It could be that the phrase came from the simple concept that sweat is stinky and gross. Pigs are also stinky and can be gross.

It is not for sure where exactly the phrase “sweating like a pig” came from, but the truth of the matter is pigs don’t sweat. Because they don’t perspire, they wallow in mud to keep cool. Lots of times pigs look super gross, and even like they are being kept in horrible conditions, but the truth is, they like the mud. Even if it is cooler, our pigs like to root in the mud and get messy. 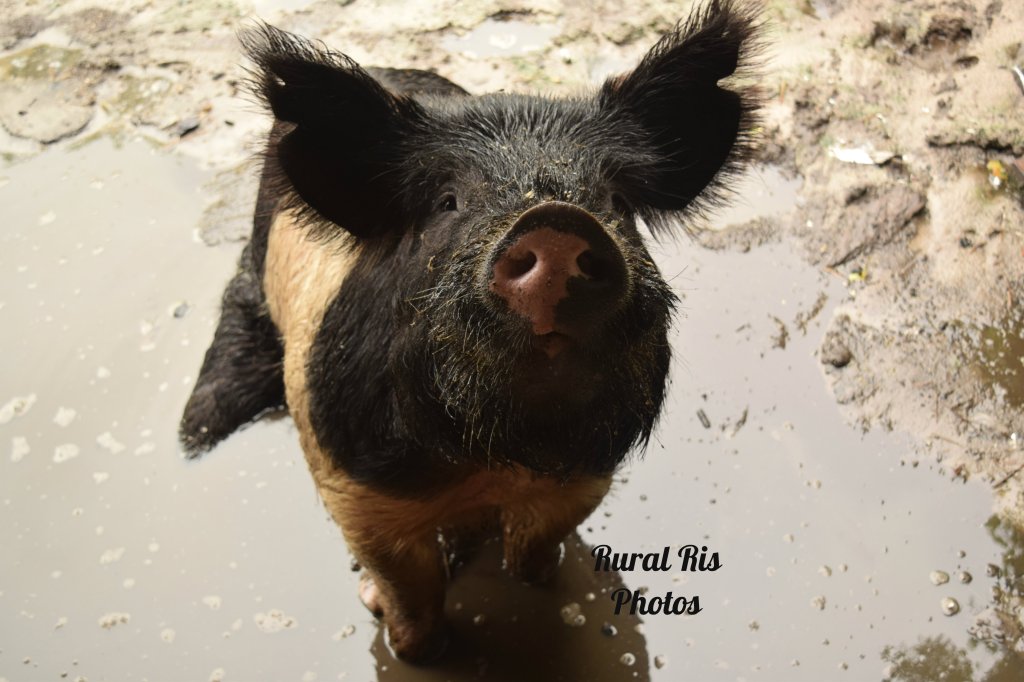 One of the great things about hog farms, is pigs can be kept inside with sprinkler systems. They absolutely love this. It is like their own personal sweating system. There are also fans for them too. They are really quite spoiled.

Pigs may be stinky animals and enjoy getting into muddy messes, but you can’t blame them for being sweaty AND stinky, just the stinky part. 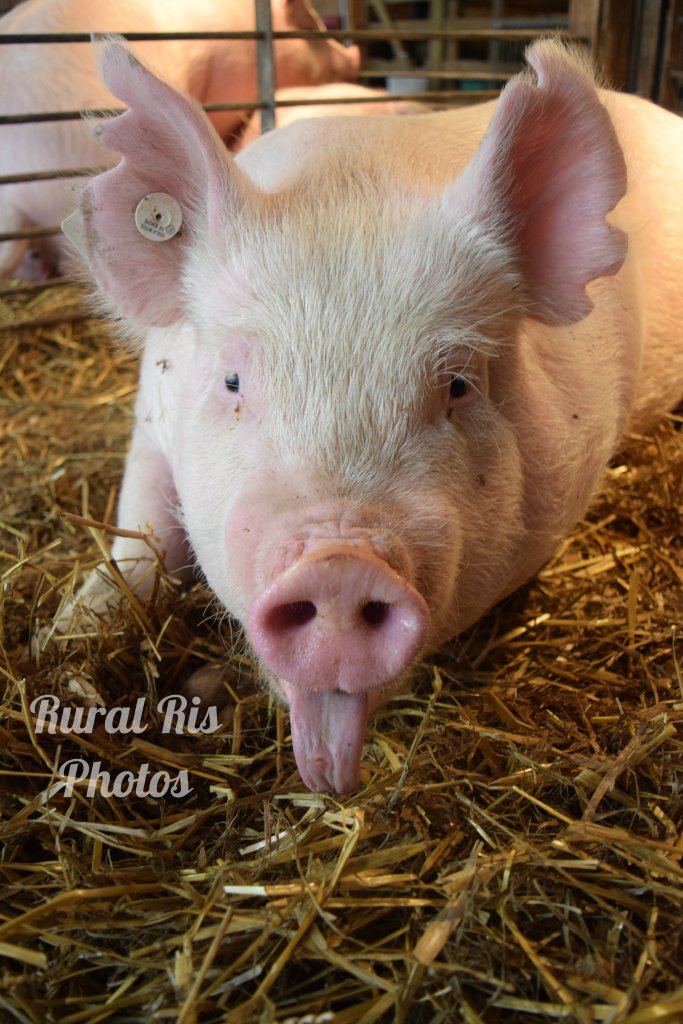