I was already feeling a bit ambitious, deciding to go 7 hours one way to get a single goat. Little did I know, I would need even more ambition to get back home.

For months, I had been on the hunt for a new buck. We have owned ours for quite a while, and it was time for some new blood. I started to follow various online sales and Facebook goat pages to see if I could find any. Finally, I found one that wasn’t in Timbuktu and was in the budget. After contacting the owners, I made arrangements to pick him up yesterday. He was in West Virginia, towards the Pennsylvania border. I decided I was going to be ambitious and travel 14 hours in a day to pick up a buck I had never seen in person. I’m fully aware I may be a tad crazy, but it is hard for me to pass up a good deal–especially when we are talking livestock.

I persuaded Garrett to go on my crazy adventure with me (he should get some kind of boyfriend award since he did have to wake up at the crack of dawn, ride in the car all day, and pick up a goat when he is a pig guy). He also suggested we take his family’s truck since it had a box in the back of the bed, preventing the need to haul a trailer. We agreed to meet in Rocky Mount at 8 am sharp, grab Bojangles (because that makes any 8 am day better), and head out. Our ETA was 3 o’clock.

Several hours down the road, we decided to start looking for lunch. I found a sign that directed us to the wonderful Chick-fil-A. This was a no-brainer stop. I cannot tell you how excited I was for my spicy chicken sandwich and waffle fries. We obtained the food goodness and got back on the road. As we were trying to get back on the highway, I turned down a one-way street. As I turned, we heard a noise. I asked what that was. Garrett replied with a shrug (he was focused on his cool wrap). A hundred feet later, we stopped at a stop sign. When I went to go, the truck didn’t want to. I slowly tried again. Still, it wouldn’t do anything. Garrett told me to wiggle the gear stick to make sure it was in drive. We then proceeded to try different gears. After no success, Garrett told me to put the four-ways on. “Where are they?” said a very flustered Risa. Garrett was very calm and told me where before getting out of the truck. By this time, there were a line of cars behind us. I waved them around us. Garrett came back to the truck after investigating and said a very dreaded word–transmission. Now, I don’t know much about vehicles, but I know that when transmissions are mentioned, it isn’t good and $$$ comes up. My heart sank as I looked around. It was hot, we were blocking a road, this was not the best part of town (most houses were boarded up), we were 5 hours from home, and the buck was still an hour away. Suddenly, my enthusiasm for my spicy chicken sandwich was gone. As Garrett called a tow truck (thank goodness he had AAA), he told me to try and eat my sandwich anyway.

We waited for close to 30 minutes for the tow truck. While we were waiting, we attempted to push the truck across the road to a parking deck. Even with the help of a couple of ladies, it didn’t go so good. Finally, we were able to back (more like reverse roll) the truck away from the stop sign and onto the side of the road. In one of the houses sat 4 people, who called Garrett over to “just talk” (we were a little sketched out and they were a bit tipsy). Finally, the tow came, and after deliberating which shop was our best bet, we were towed from Cumberland, Maryland to Frostburg, Maryland. 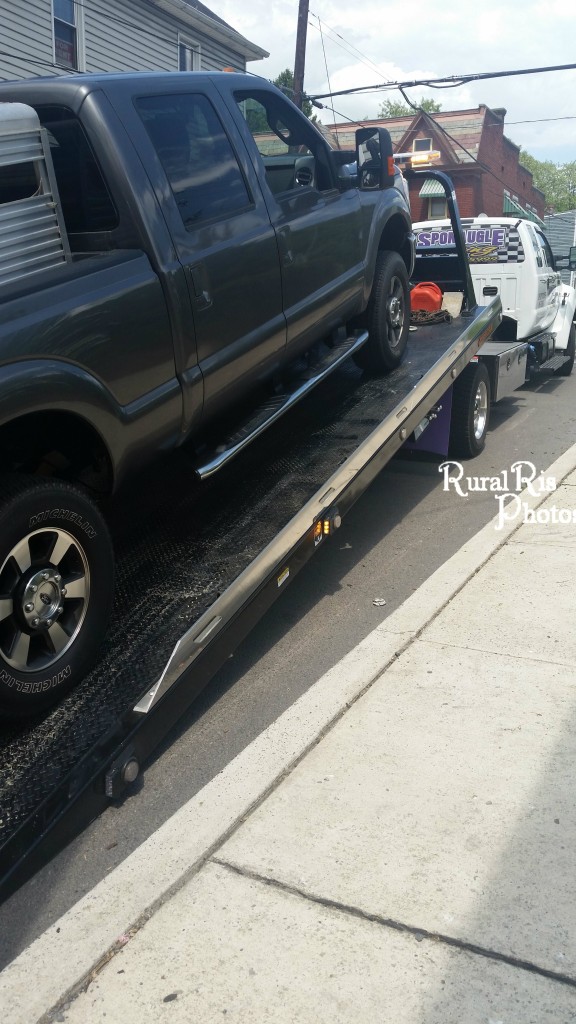 We had been told that they could look at the truck and probably work on it that day; however, when we arrived, we were told that they could barely get a look at it and could almost promise that they couldn’t fix it that day. Long story short, we weighed our options, decided against the extortionate tow to another town, and took our chances at the shop. We were hoping against hope that it was a simple fix.

We waited in the waiting room, looking through the window at the mechanics working. The next thing we knew, our truck was cranked and moving! I held my breath as the mechanic came in to talk to us (I swear it is like waiting in a doctor’s office). He said, “You know that slim chance of it just being a matter of putting two hoses back together? Well, you got that slim chance.” The transmission line had become corroded and broke at the joint. It was able to be patched, and the transmission had not been torn up from the incident. I was dancing in my head.

After paying, Garrett asked me if I still wanted to go get the goat or just head home. Remember, ambitious is the theme of the trip, so of course, I said let’s go down the road further and get that goat. Off we went. While breaking down sucked, it was good that we broke down where we did, because further up the road, there was absolutely nothing. It was just backroads and mountains. We finally hit West Virgina and began to climb the mountain where the goat was located. This was a very winding, bumpy road with pot holes like you wouldn’t believe. We had to cross a single-lane bridge, and make a u-turn on the side of a mountain. After the trek up, we finally made it to our destination. Our detour had put us 3 hours behind, so I did not want to lollygag looking at goats. I decided the buck looked good, so we led him up part of the mountain to the truck. It took 3 men to pick him up and load him. After paying and a thanks, we hit the road once again.

It was a long 7 hours home. Garrett and I kept each other awake by playing road games, singing to the radio, and eating super sour gummy bears. We arrived home at 2:15 a.m. I put a halter on the buck, but when he jumped from the truck, he kept running and ripped the rope from Garrett’s hands. We then spent the next 15 or so minutes trying to catch him in the dark. He wasn’t acting crazy, but was disoriented and wanted friends. Anyway, we caught him and put him in a pen with food and water. Garrett and I dragged ourselves into the house to hit the sack. Our faces looked a lot like the goat’s–we were so tired. 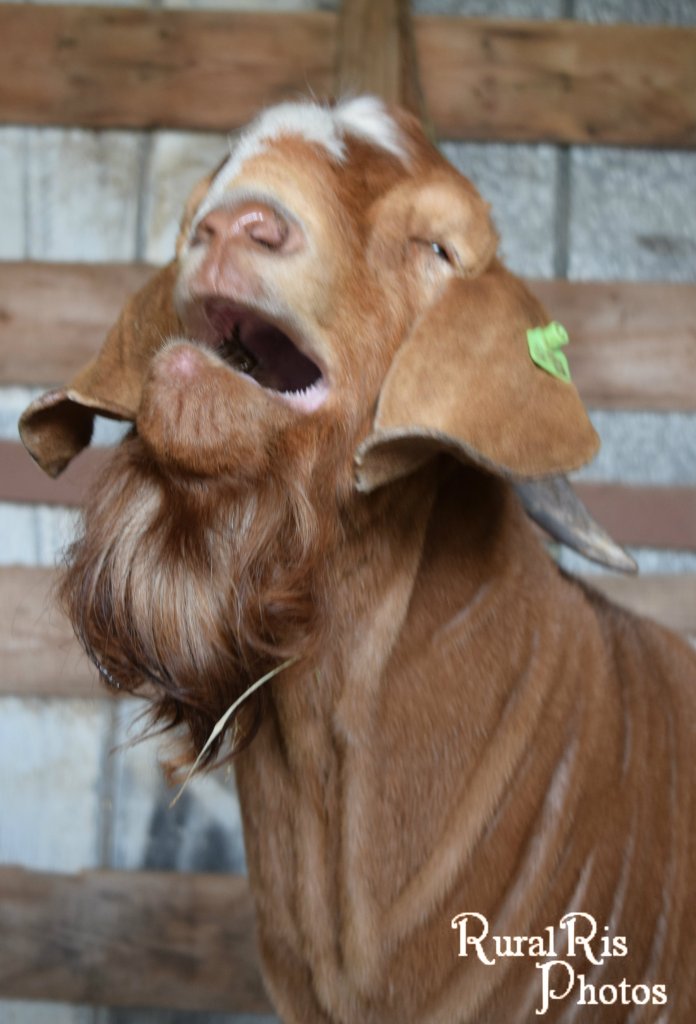 The day hadn’t gone as planned; then again, it was a Monday. It could have been much worse, though. All I know is, between bucks and trucks, I got more than I bargained for! Maybe I’ll name the buck Transmission. For now, meet our new herd sire, while I catch up on some sleep. 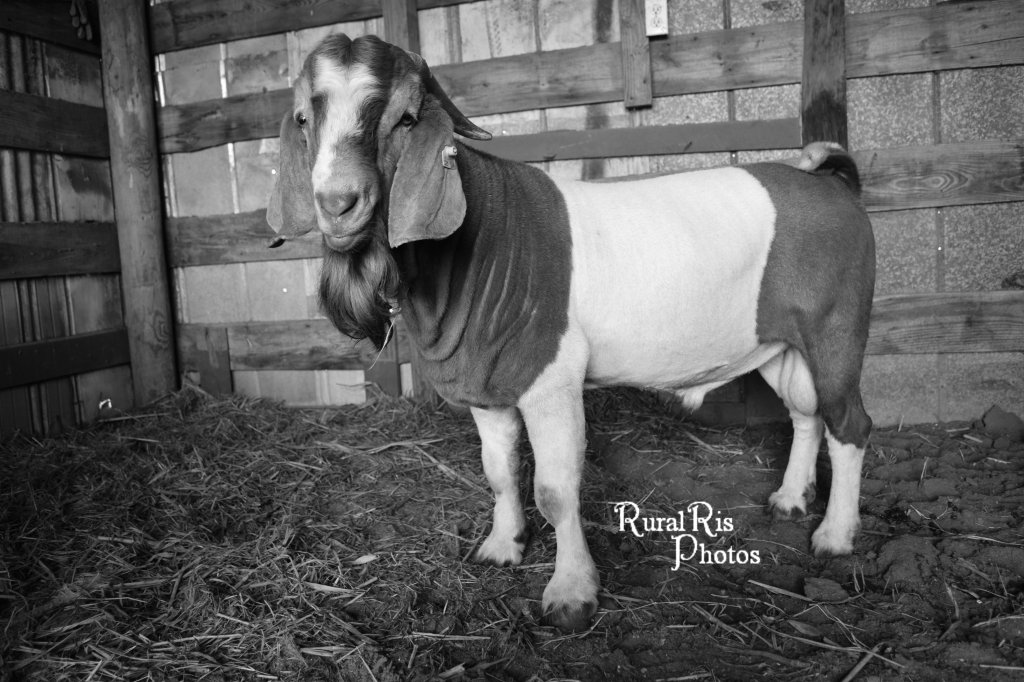