And then, it was our last day…

How did today get here? Weren’t we just arriving? Wait! There’s so much more to see. And yet, I was glad. So glad to get home because, well it’s home and normal…except it wouldn’t be normal because I would be moving across the country to a new home in Nebraska. Trading in one adventure for the next. You know, I was okay with that.

We awoke early in Fort William. The town was much more charming and scenic in the daylight. Before exploring the town, though, we headed straight for the Glenfinnan Viaduct, aka the Jacobite Train, aka the train from Harry Potter!!

We planned the time to go based on when the train would chug across the Viaduct. After parking, we hiked (yes hiked) to the scenic overlook. It was a nice path and not too hard, but there was bit of uphill, and we were still recovering from Skye.That being said, I found a lovely rock to perch on that provided excellent views.

Then, we waited…and waited. It felt like ages, but in reality was probably like 30-45 minutes of wait time. The longer we waited, the more crowded the hill became. Everyone wanted to watch. Be sure to get there early!

Through the pass, we saw smoke billow. Then, we heard the classic train whistle and waved to the passengers on the train. It was pretty magical. I’m sorry to say, though, that it wasn’t Harry Potter magical. No wizards here. 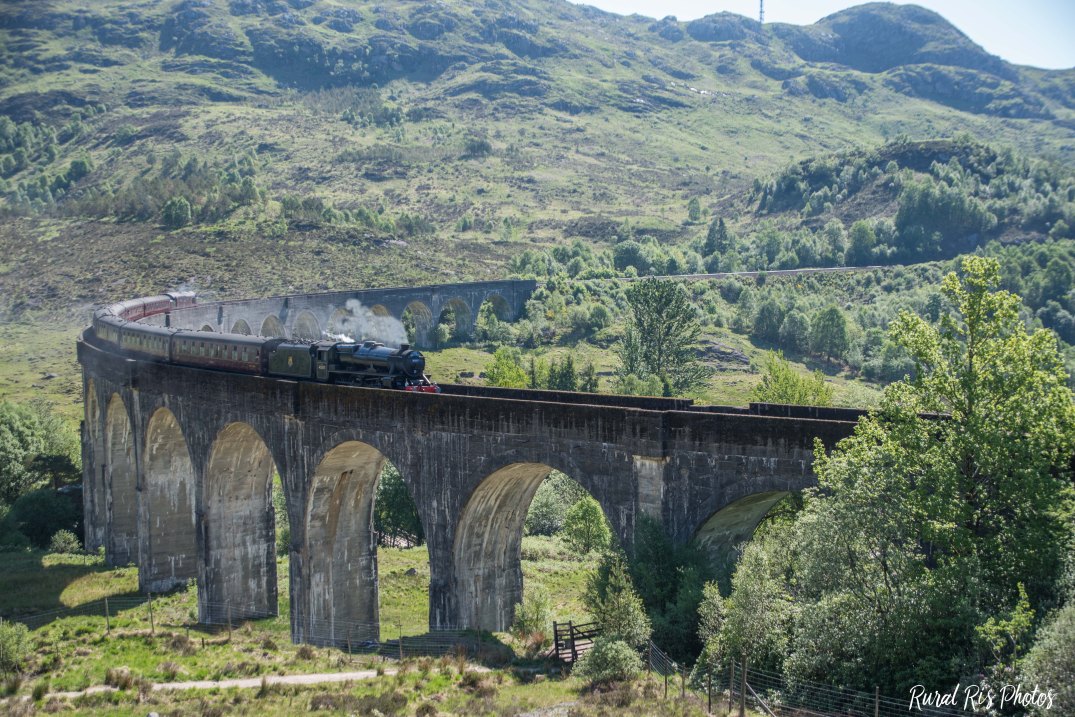 Seeing what we came to see, we headed back to Fort William for lunch in the city centre. The cobblestone streets were so quaint, and the shops so cute. Ice cream was excellent as well!

We decided it was too hot to hike the 2 hour trail to a waterfall we had originally planned on seeing. Instead, we headed to Locky Castle. It was in a bit of ruins, but still quite fascinating. When the owner tried to fix part of it for an upcoming visit by Queen Victoria, she said that it was quite a disappointment after seeing the alterations. Ooops! 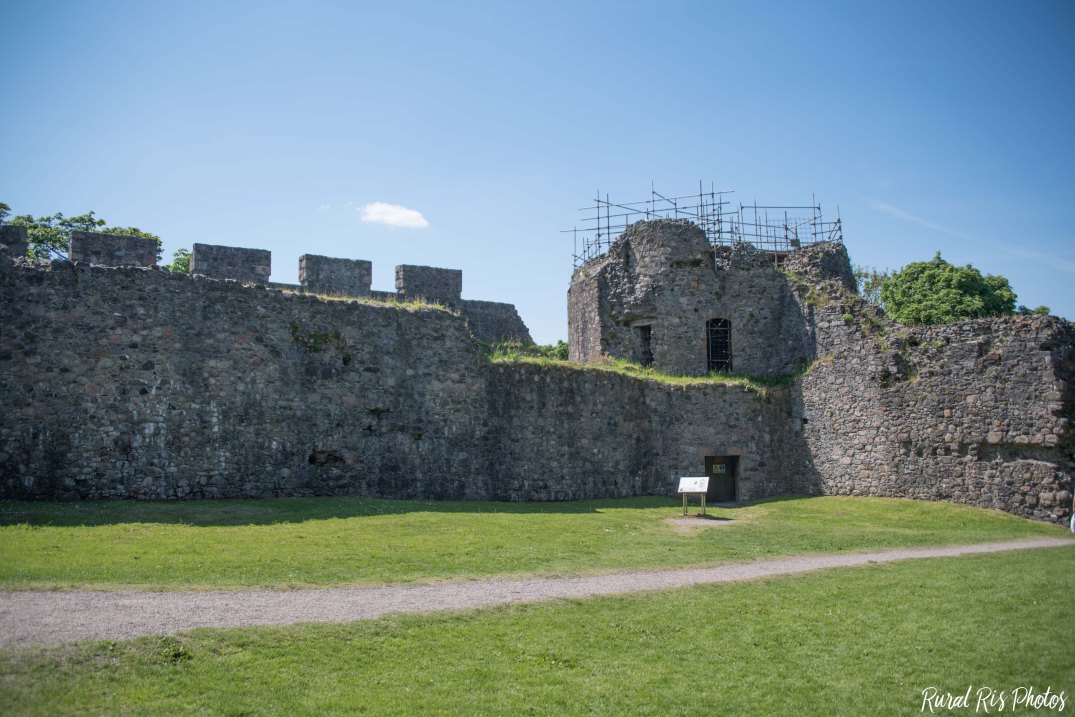 After the last castle of the trip, we headed to Glencoe. I found a folk museum visit in town. It was in a cool thatched roof, but wasn’t worth the 3 pounds each we paid for admission. It had an eclectic mix of antiques more than anything. I will say, it explained the MacDonald Massacre well and had an interesting exhibit on that.

Before heading out of the town, we stopped at the Glencoe Cafe for some cappuccinos. So delicious! If I could go back, I would have definitely have grabbed the shortbread to go.

As we winded our way through the beauty of Glencoe, we stopped all along the way for pictures, because, well, it’s criminal not to capture and enjoy the splendor. Garrett said that he really wished we had more time to explore this part of Scotland. I don’t disagree. 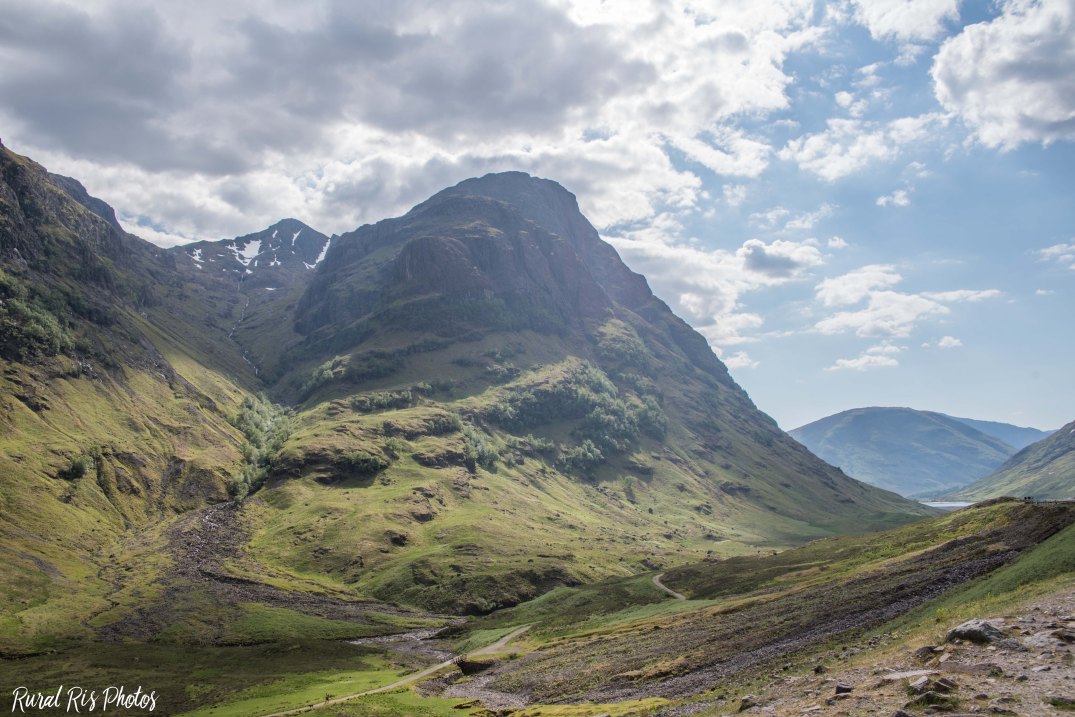 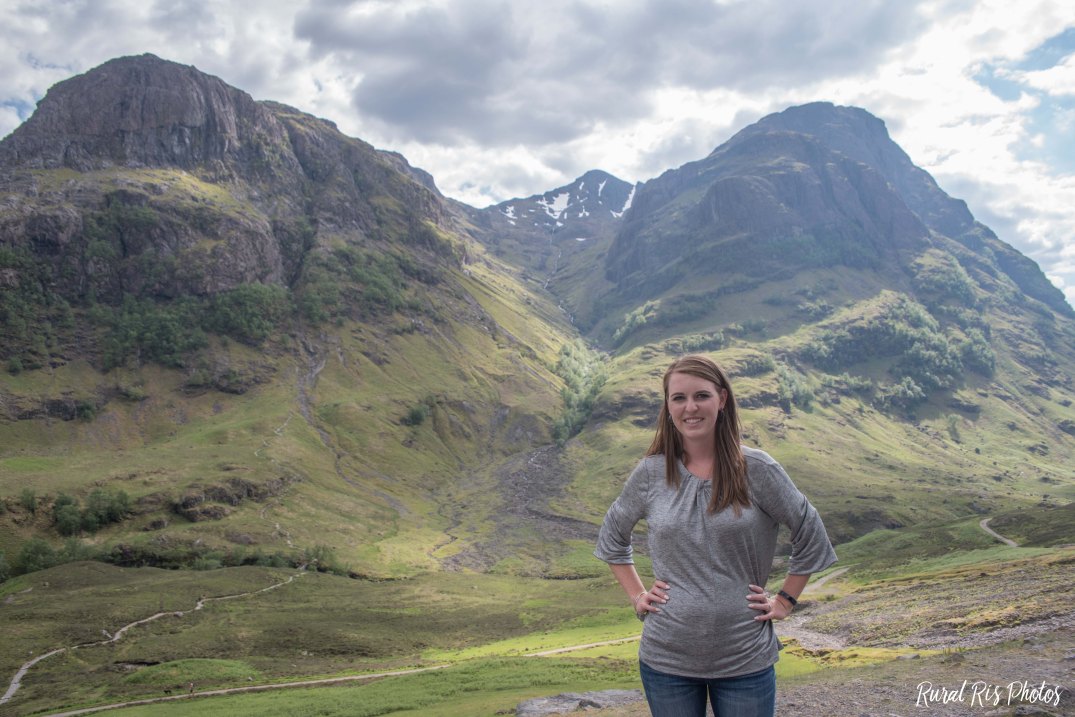 It seemed to take us forever to get to Edinburgh, but we made it to our last hotel of the trip. This was our only hotel during the entire trip that had ac! We felt so spoiled. We ate at the hotel and had delicious food. After packing, we were in bed by 10:30 to be up at 6:40 am for our flight home.

Nothing really to report on the flight home other than our plane got down-sized so Garrett lost his extra leg room, but they did give us chocolate ice cream so that made it better. I will also say that Garrett’s broken shoelace was a nightmare to deal with in security, especially at JFK where everyone seemed to be in a rather bad mood. However, we and our luggage made it to RDU safe and sound.

I must say that we have no regrets about our honeymoon. We loved every second (even the times I thought I would die) and every one of the 1,000 miles we drove. I’m so glad we not only chose Scotland, but we chose somewhere neither of us had been and somewhere that had loads of exploring opportunities. To me it was the perfect mixture of wonder and relaxation that a honeymoon should contain, but also great team-building exercises that helped us learn to work together.

Now, we have memories that we will forever cherish.

Day 7 was quite the series of events. It was our last day on the Isle of Skye, which was a bit of a bummer. The day started with Garrett breaking his shoelace. This was only the start of a series of unfortunate/interesting events. Despite these events, it makes me smile and was so fun!

We started with a tour of Dunvegan Castle. It is the longest continuously inhabited castles in Scotland. Because of this, it was not in ruins, but did have some nods to other centuries. It was a combination of a castle and Biltmore Estates in NC. The MacLeods had a lot of family history in the castle which was very interesting. Outside were impressive gardens complete with waterfalls. They had been developed throughout the years. While the most expensive castle to tour, it was worth it in my mind. 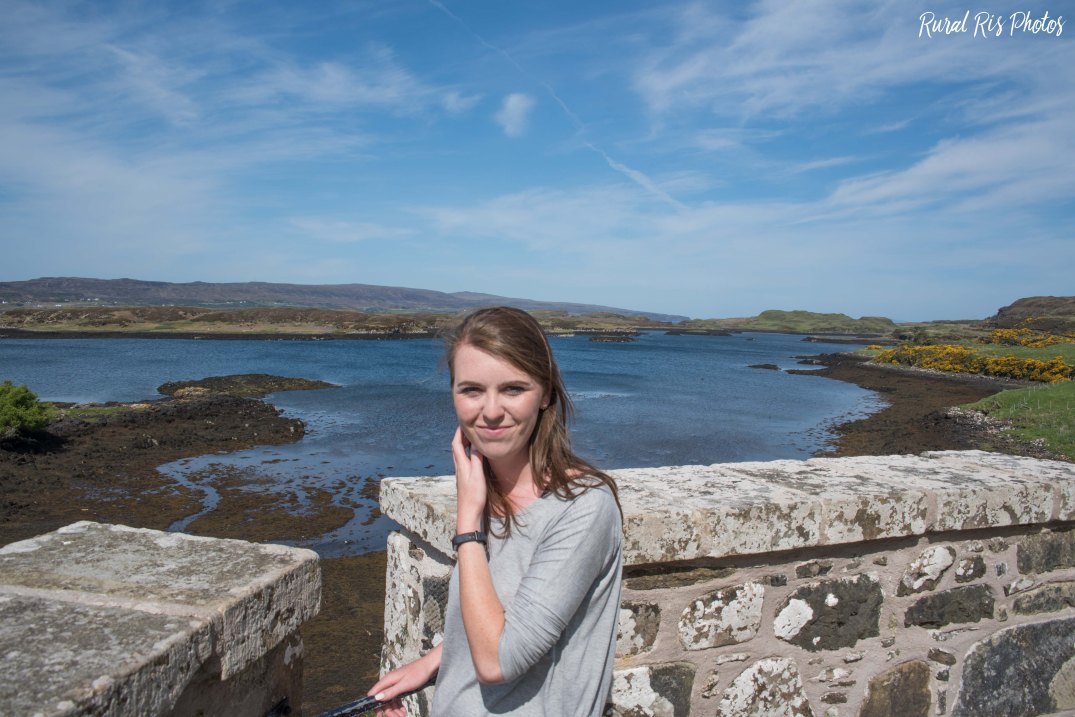 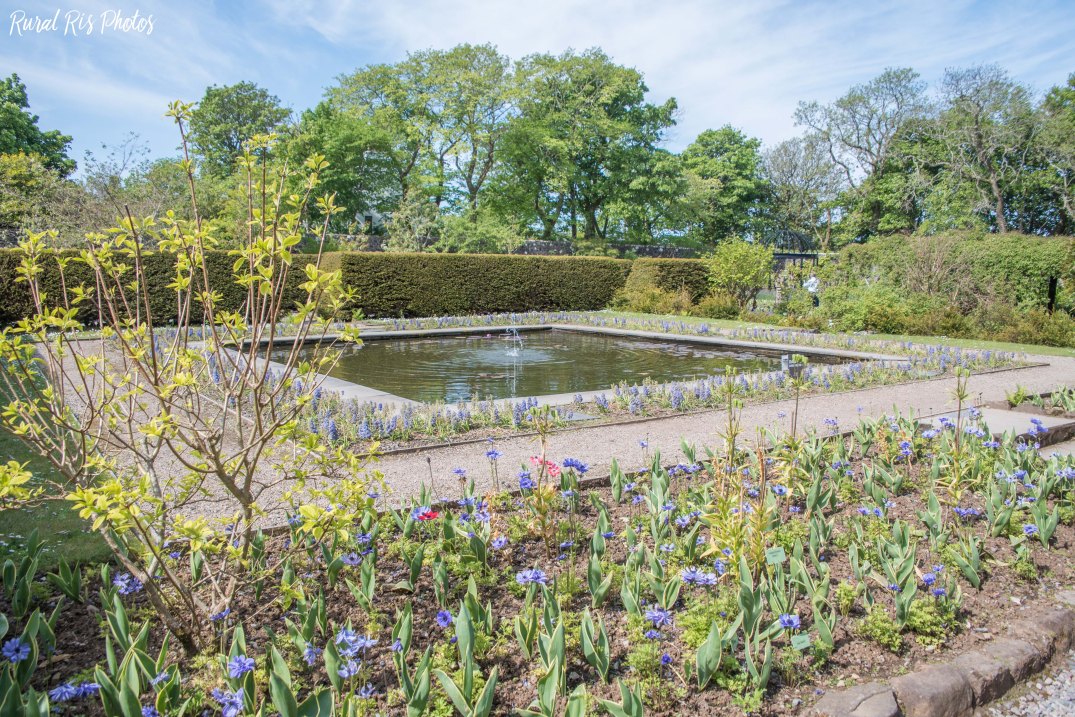 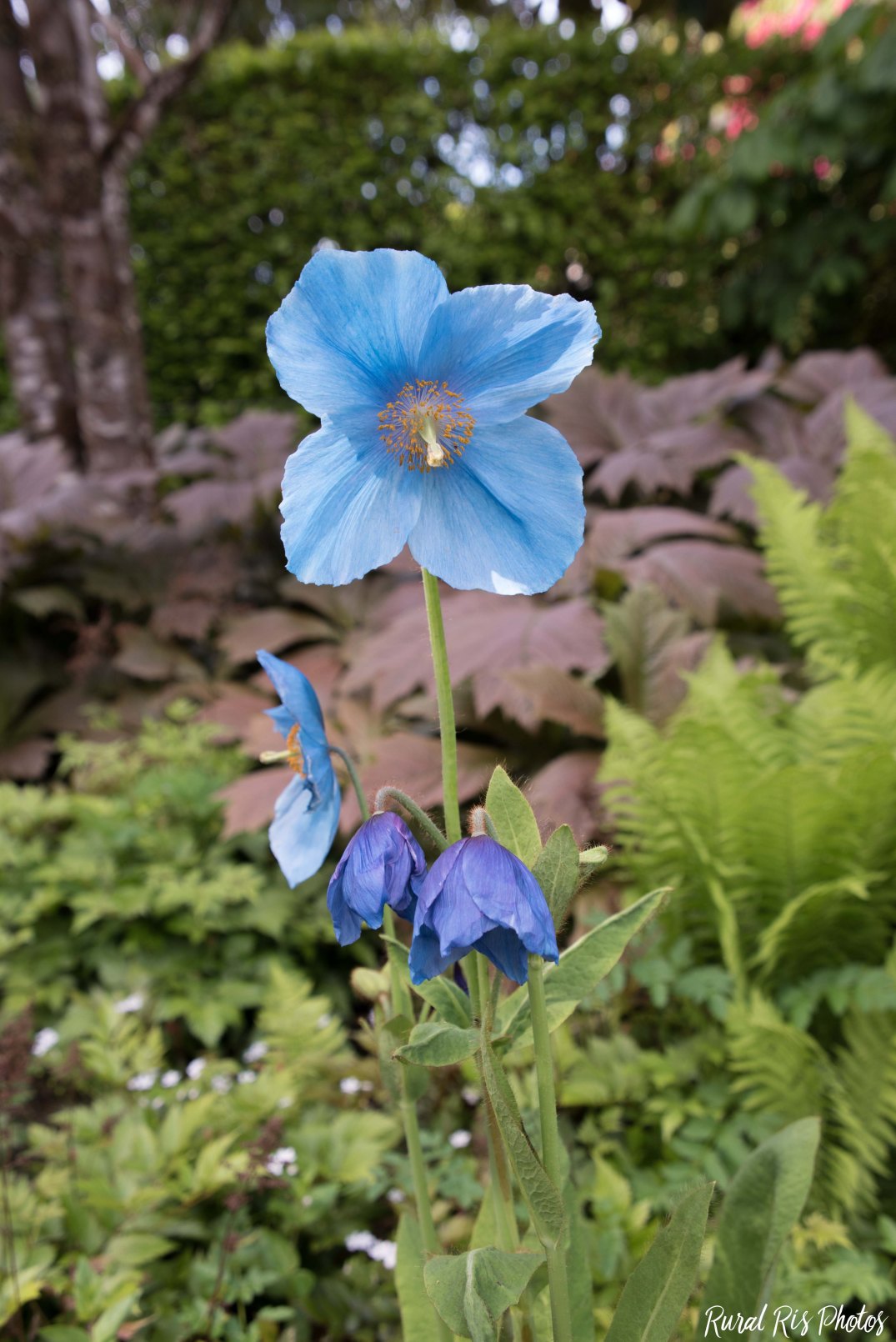 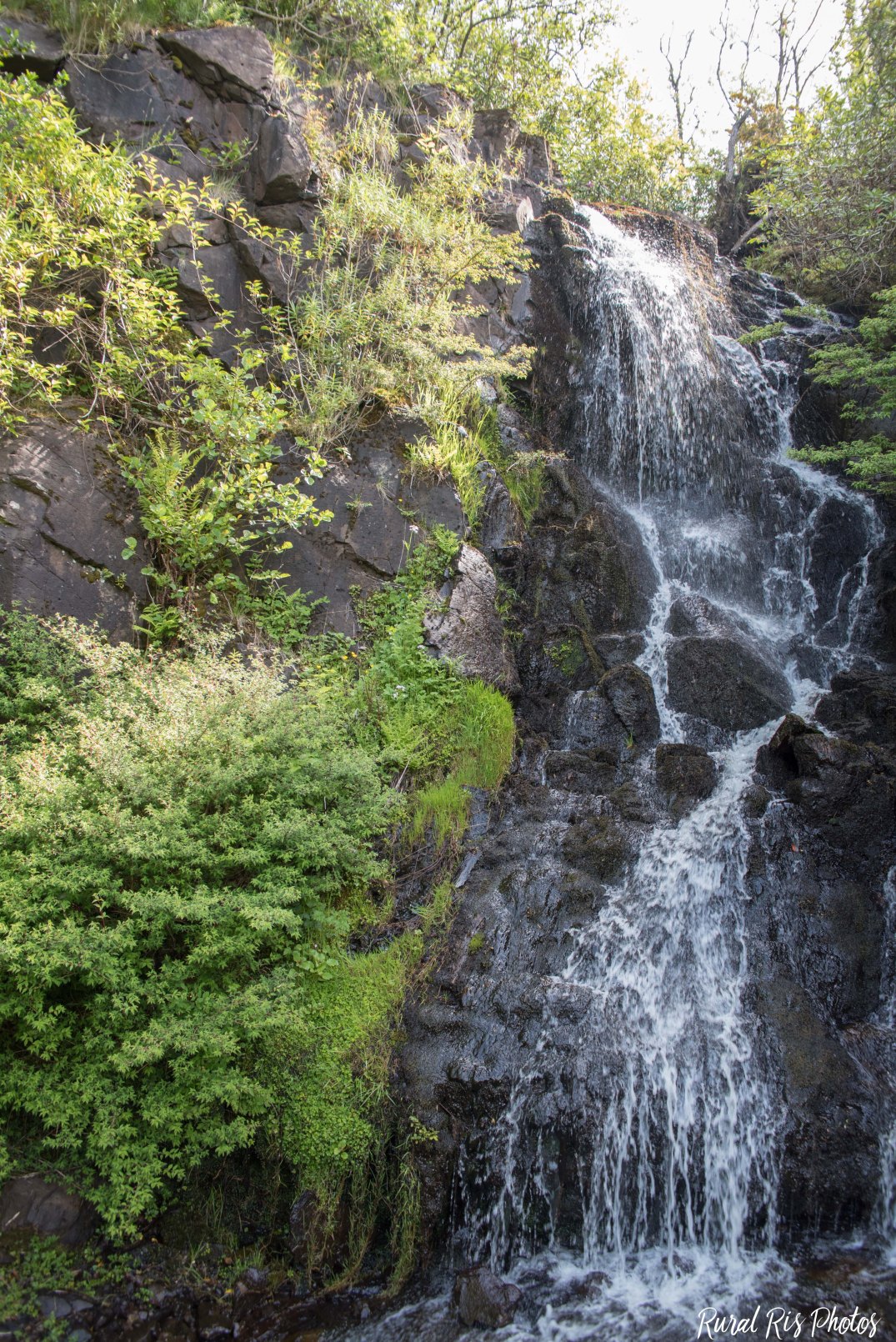 After eating lunch at a cafe that overlooked a loch, we headed to the Fairy Pools. This was another favorite place of mine on our trip. It is a popular destination, so go early or prepare for some crowds. We had to park a quarter of a mile down the road and hike to the trail head. Keep in mind we were pretty dead from the day before; however, this hike was very pleasant. 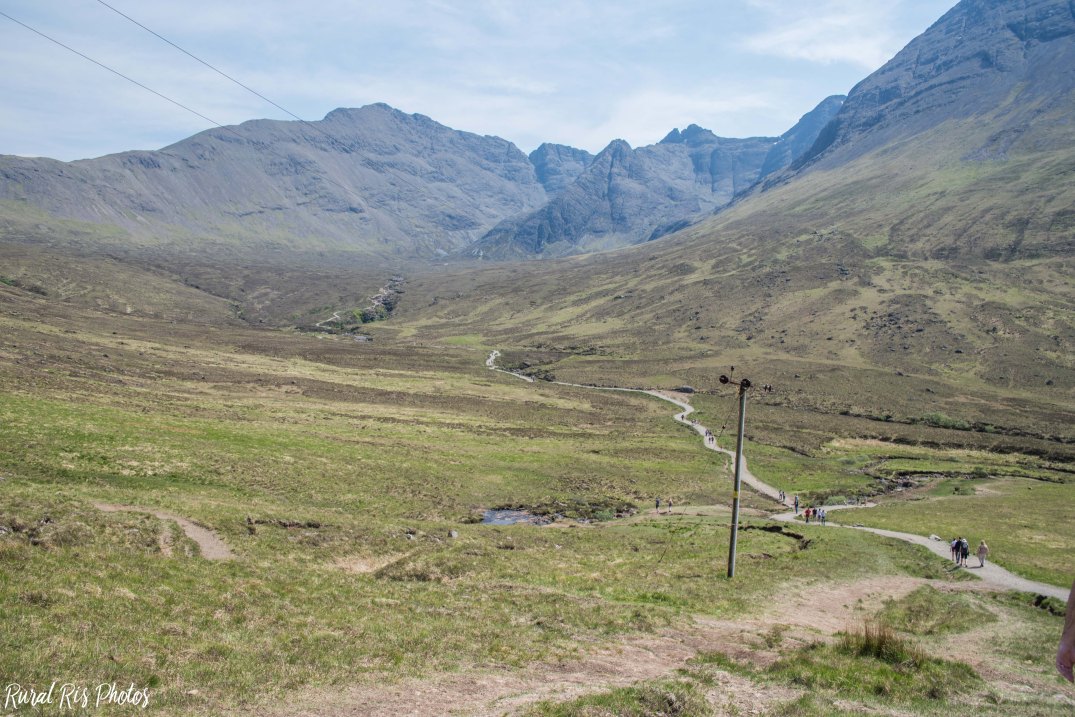 The trail follows water that leads to the Fairy Pools. These pools are deep, crystal clear, blue, and very cold. Many were swimming in the pools. We didn’t go swimming, but we did take our shoes off and dip our feet in. While there were a lot of people, we were still able to find secluded spots to enjoy the scenery. The hike back was equally as pleasant until we reached the hill to the road. That sucker was steep. I was sweating and out of breath by the time we reached the car. 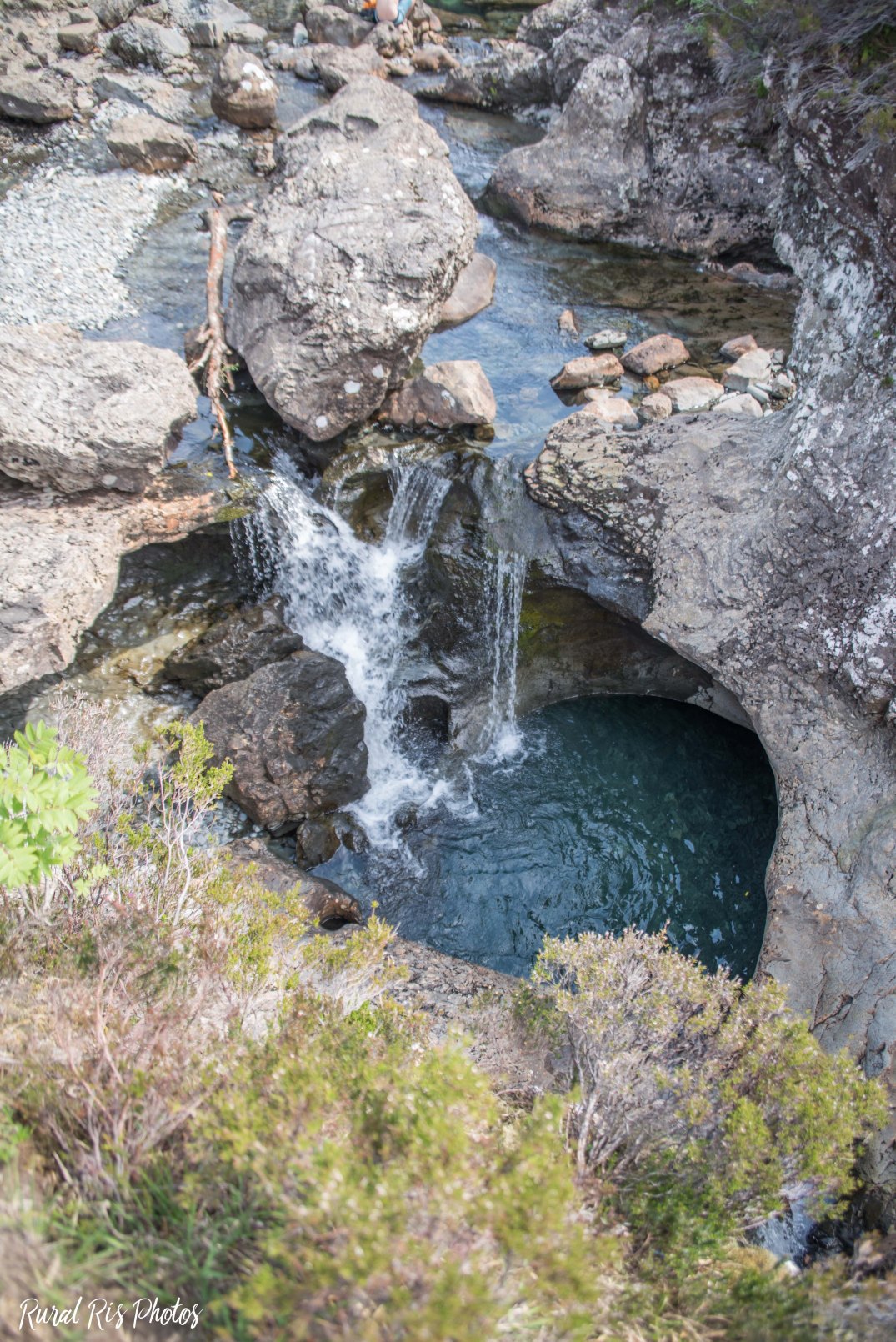 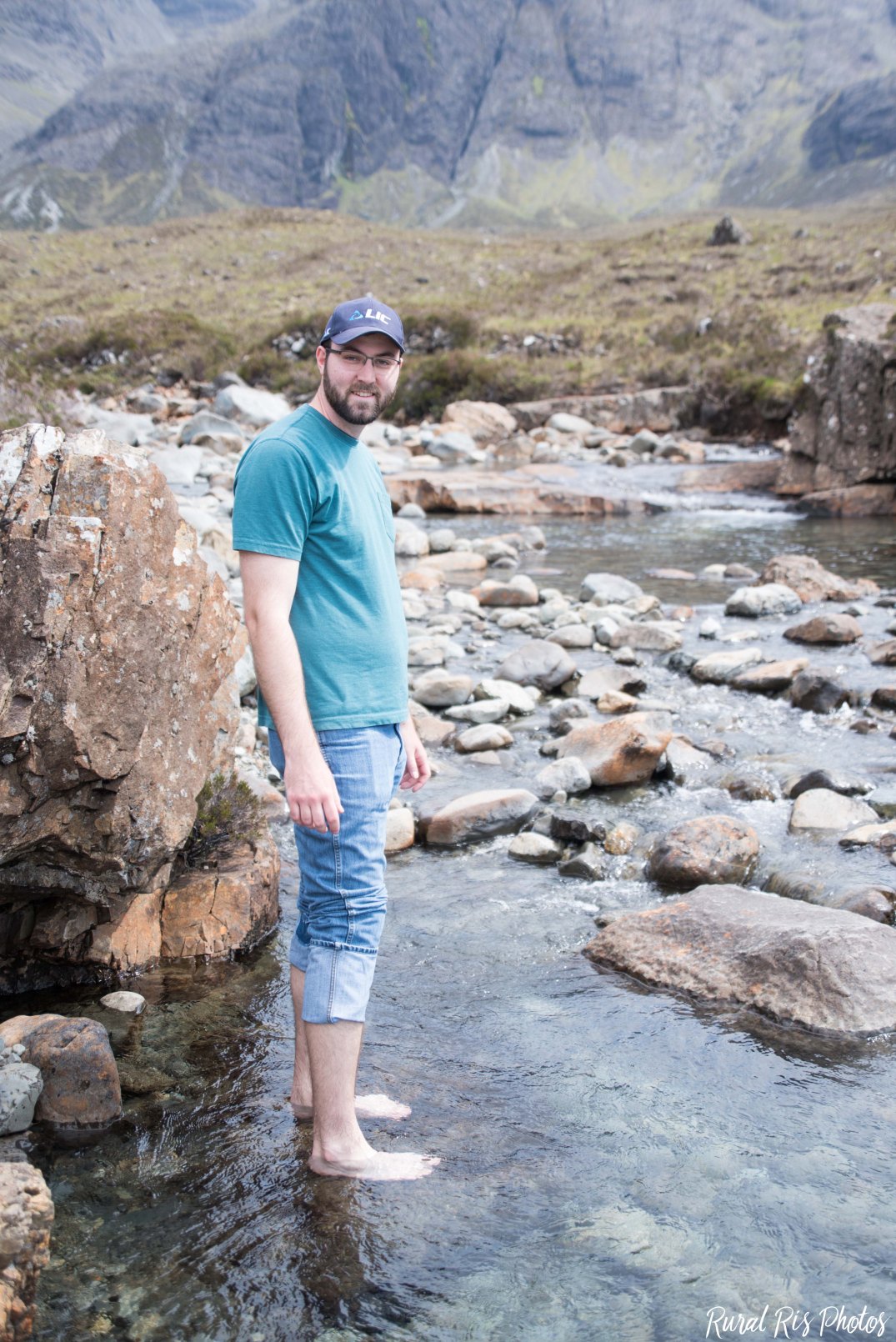 I will note that by now, Garrett is driving like a local and even made a 3 point turn on a one lane road. Today, though, his driving would be truly tested as we headed to Fort William. Little did we know that it would take an extra 4 hours to get there.

As we were heading out of Skye, we were remarking on how funny the mist looked up ahead in the mountains.

As we got closer, we realized it was billows of smoke! This was confirmed when were stopped by the police and told to turn around due to a wildfire that had spread to the road and was quite large. He was very nice and even apologized for the inconvenience. We thanked him for not letting us get burnt! 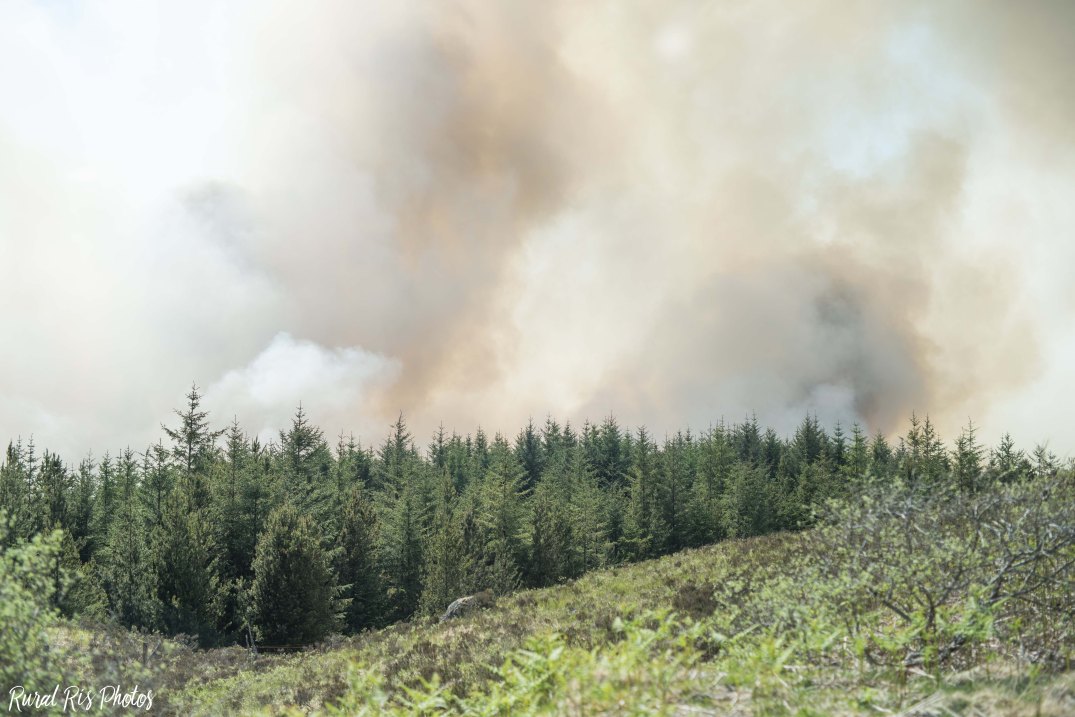 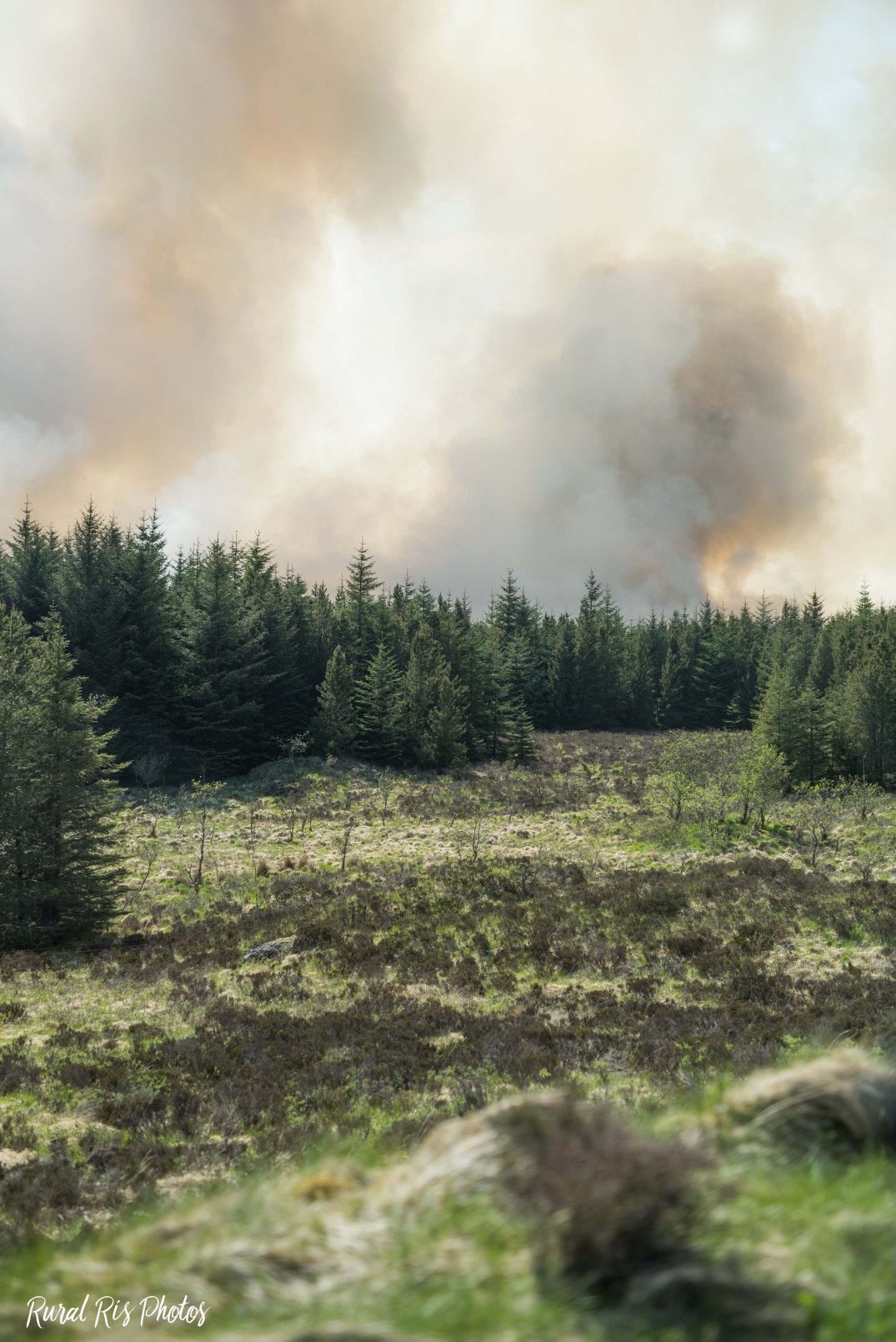 After getting directions from him, we headed back down a very curvy narrow one lane road to Portree. We had just been down that road that morning. It was much more busy now. Also, meeting a tour bus on such a road is a bit nerve-wracking. Garrett did great, though on the hour detour. As we were finally leaving Skye, you could see the line of fire run across the hills. I’m glad we didn’t get trapped on the Isle. There aren’t but so many roads.

Before we could make it to Fort William, we hit traffic on A85. People began turning around. A bus driver rolled down his window and told us there was a wreck ahead and there would be a 5 hour delay!! We were only 45 minutes from Fort William. Our choices were to hope it wouldn’t be a 5 hour delay or drive an hour to Inverness to go 2 hours to Fort William. We decided the 3 hour detour to Inverness was safer than waiting. It ended up being the right decision.

We went to Inverness and ate at La Tortilla, a restaurant we had seen but didn’t go to a few days ago. I had a hankering for Mexican and was really hoping for some salsa and chips. Yeah… that’s not what this place was. It was Spanish. No chips and salsa. Just bread and an odd menu that we weren’t sure what was what. We asked the waiter how this works and ended up ordering 2 bowls of potatoes with spicy sauce, 1 bowl of chorizo sausage, and a bowl of garlic chicken. It ended up being cheap and very delicious. And yet, our adventures for the day were not over.

The alternate route to Fort William took us down a very scenic, but was very narrow and curvy. I was nervous, especially when on-coming traffic came. This was a two lane road, but the narrowness and curves made it scary. Garrett did good, but also scared me. I was white-knuckling it. What made it worse was it was 50 miles of it! It was all made more scary by impending darkness. Finally, we made it to Fort William.

We arrived at the cutest hotel, but had to park in the last parking spot–a bus spot at that. Inside the hotel was newly redone and very nice. We had to climb a narrow steep staircase to our room. It was certainly hot in our room (no ac) but the view out the window was over the water. 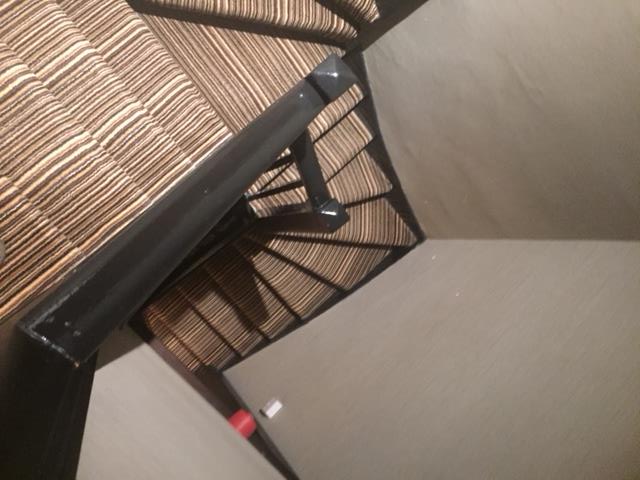 Our adventurous day was over. It was absolutely crazy. To think, it all started with a broken shoelace.