The next morning on our honeymoon was early. We ate breakfast in our hotel’s sunroom and headed out to Loch Ness.

On a whim we decided to by tickets for a boat tour of Loch Ness that we had learned about through a pamphlet. It was a fabulous decision! We chose the tour that would take us through the canal, loch, and to see the outside of Urquhart Castle. We were almost late thanks to the GPS, but made it! The tour took a total of 2 hours and was filled with great facts and lovely views! It even had a Loch Ness detector.

Our next stop was to explore the grounds of Urquhart Castle after seeing the outside by boat. We drove along the loch. Before touring the grounds, we stopped at the Nessie Cafe and had yummy sandwiches.

Urquhart Castle may seem like a bunch of ruins, and you may be tempted to skip it completely while in Scotland. DON’T! It ended up being Garrett’s favorite part of the whole trip and both of our’s favorite castle.

The castle is rich with history and has just enough standing to be able to imagine it in it’s glory days. Besides age, the castle is mostly in ruins because it’s last resident blew it up. You see, Urquhart was prone to raids by the McDonald clan and others. So, on the last of the raids, the owner fled, and blew the castle up as he left. Pretty crazy, right?

The great thing about this castle, is you can go everywhere. Nothing is off limits, and fabulous views surround you. Plus you can walk down to the loch and dip your toes in. After dipping his hand in the loch, Garrett claimed he had Nessie pee on him which was pretty cool. I married a goober!

While we would have stayed at Urquhart longer, we had to get to the next castle of the day–Eilean Donan. After purchasing a souvenir painting, we headed on. We did stop along the way at some cool scenery. It was different than other places we’d seen. 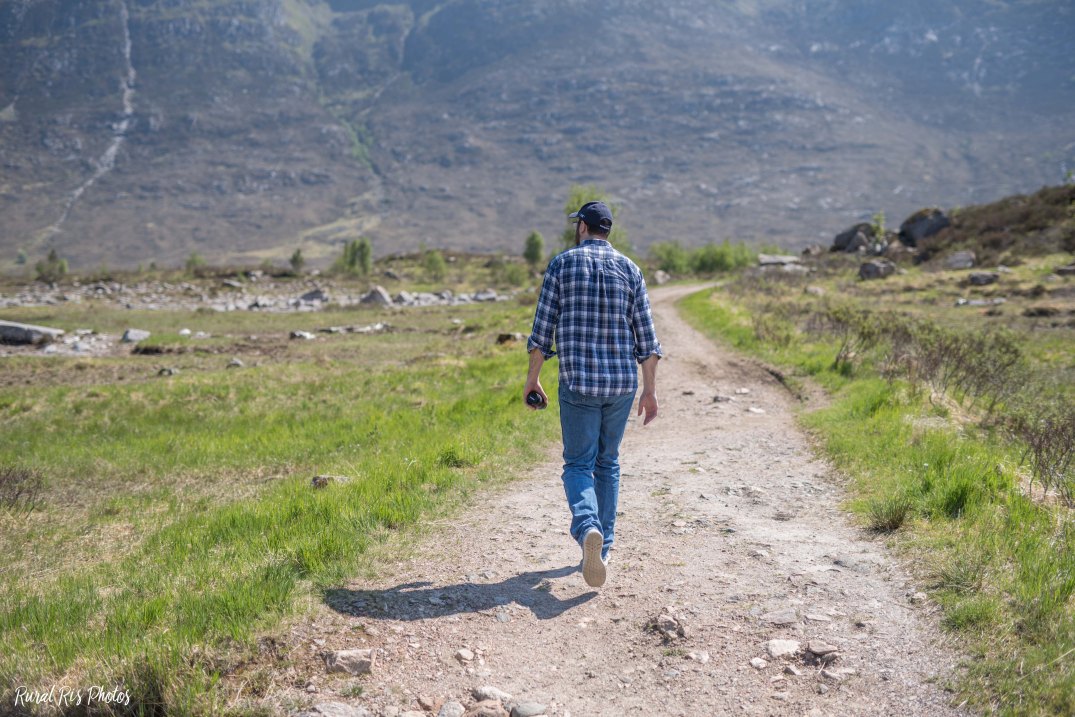 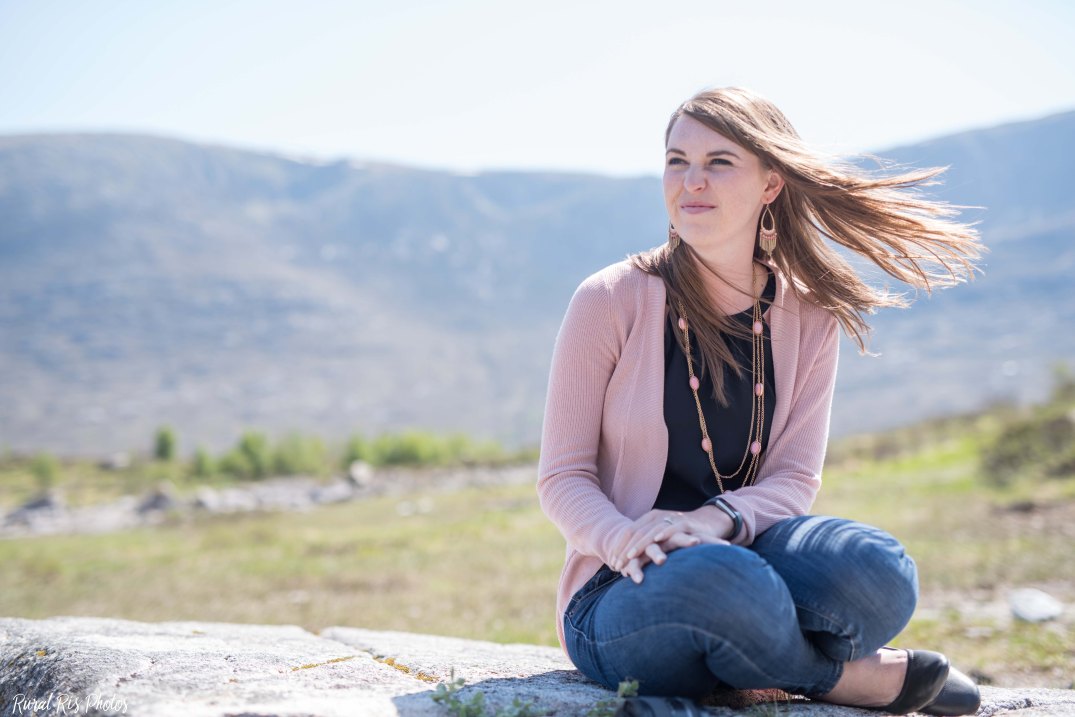 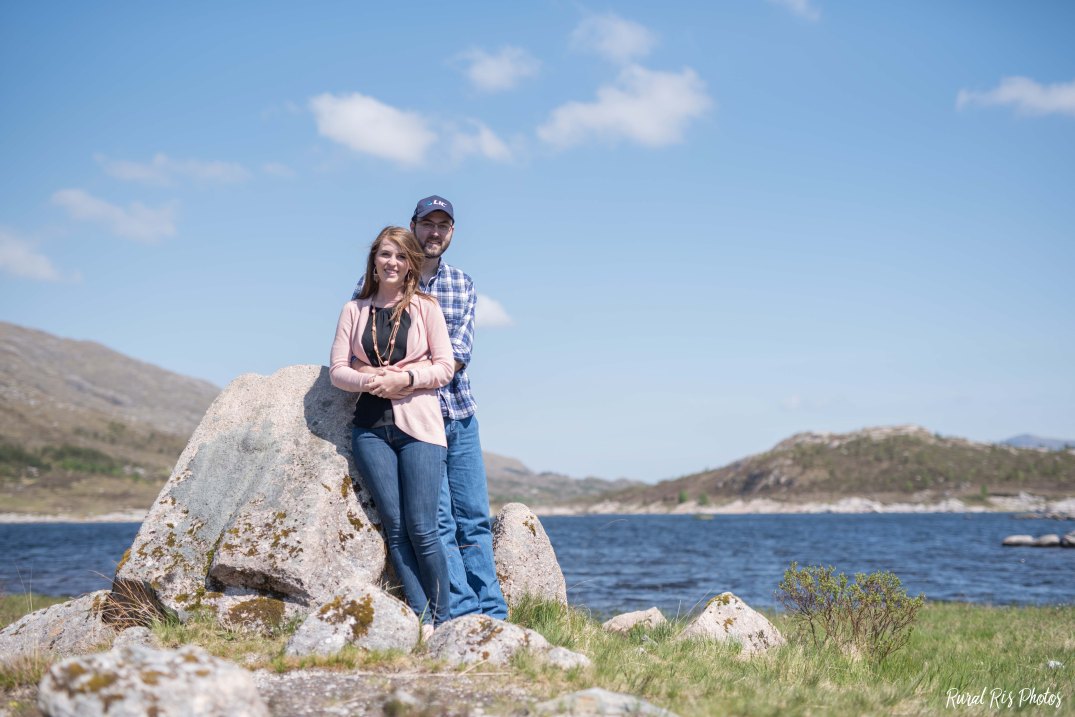 We also came across feral goats! I saw a sign that said look out for them, and just got out of my mouth, “I hope we see one!” Then, their they were! I was so excited I failed to get a quality photo, but as you can tell, they are hairy and have huge horns!

The best way to describe Eilean Donan was beautiful on the outside and weird inside. Eilean Donan is the most photographed castle in Scotland, and rightly so. Just look at it:

Inside, though, is a bit difference. Part of the oddity is that the castle was almost completely rebuilt in 1912 by the family who owned it. Inside was therefore, an odd mix of the 20’s, medieval, and a family home. While certainly not what I expected, it was still neat. They didn’t allow photography inside, so I don’t have any photos to show you of that.

It was now time to finally be on our way to the Isle of Skye. Wow, is all I have to say. We knew that Skye was supposed to be beautiful. It did not disappoint. These photos were taken just on the drive in! Wait until you see the next day. 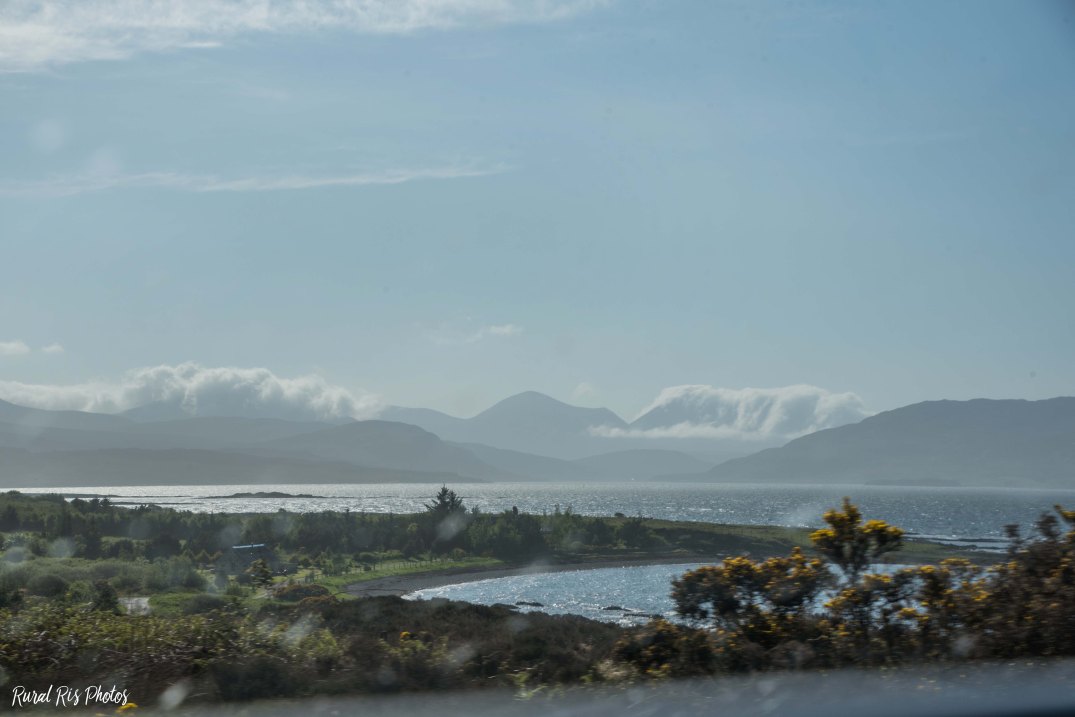 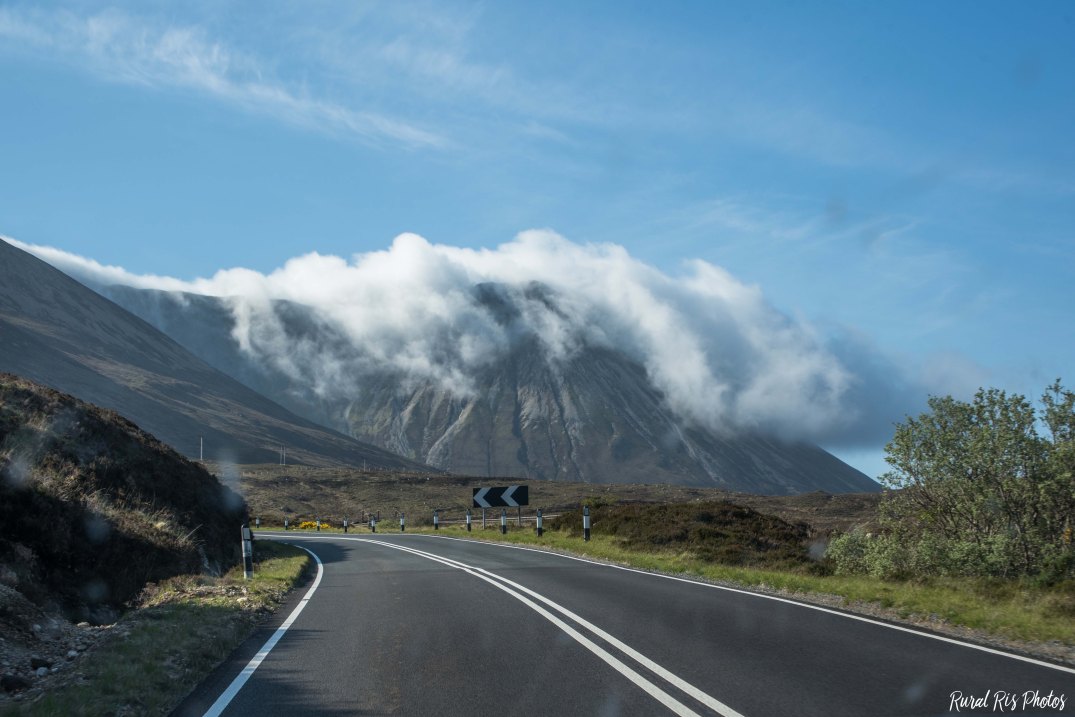 We checked into the Portree Hotel. Super cute place in the middle of town. 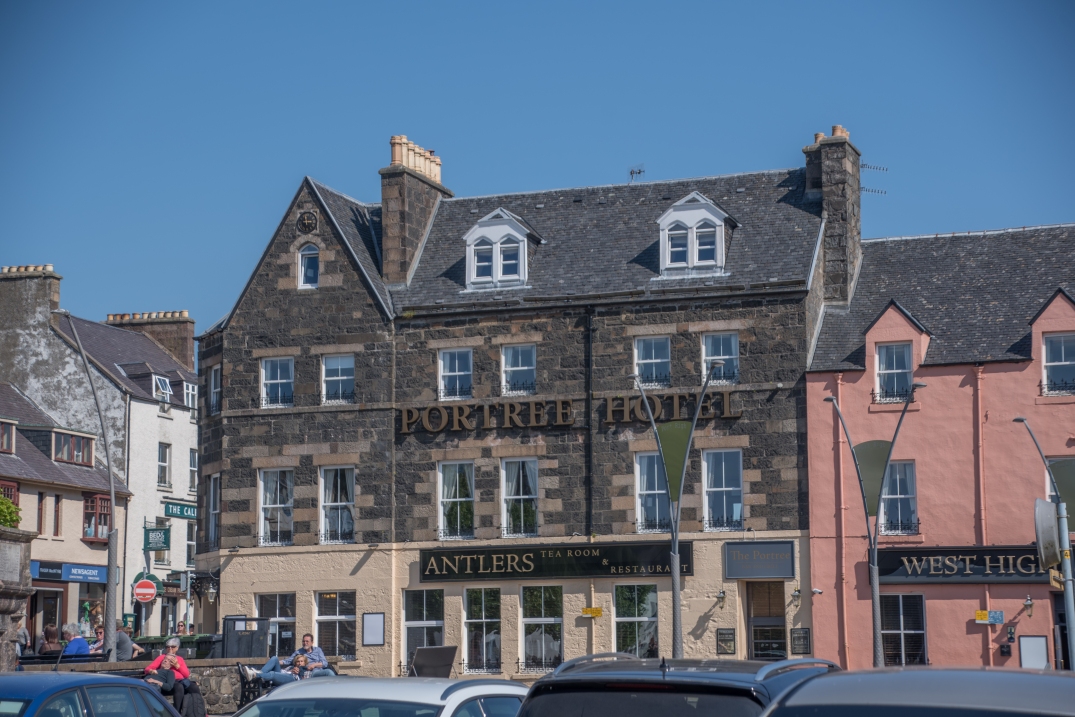 The room was itty bitty, but beyond quaint and cozy. We walked across the road to the Cafe where we enjoyed a great meal of pork meatloaf with tomato spicy cream and fish and chips. It was one of my favorite meals of the trip.

We finished it all off with ice cream and a walk around town and the harbor. 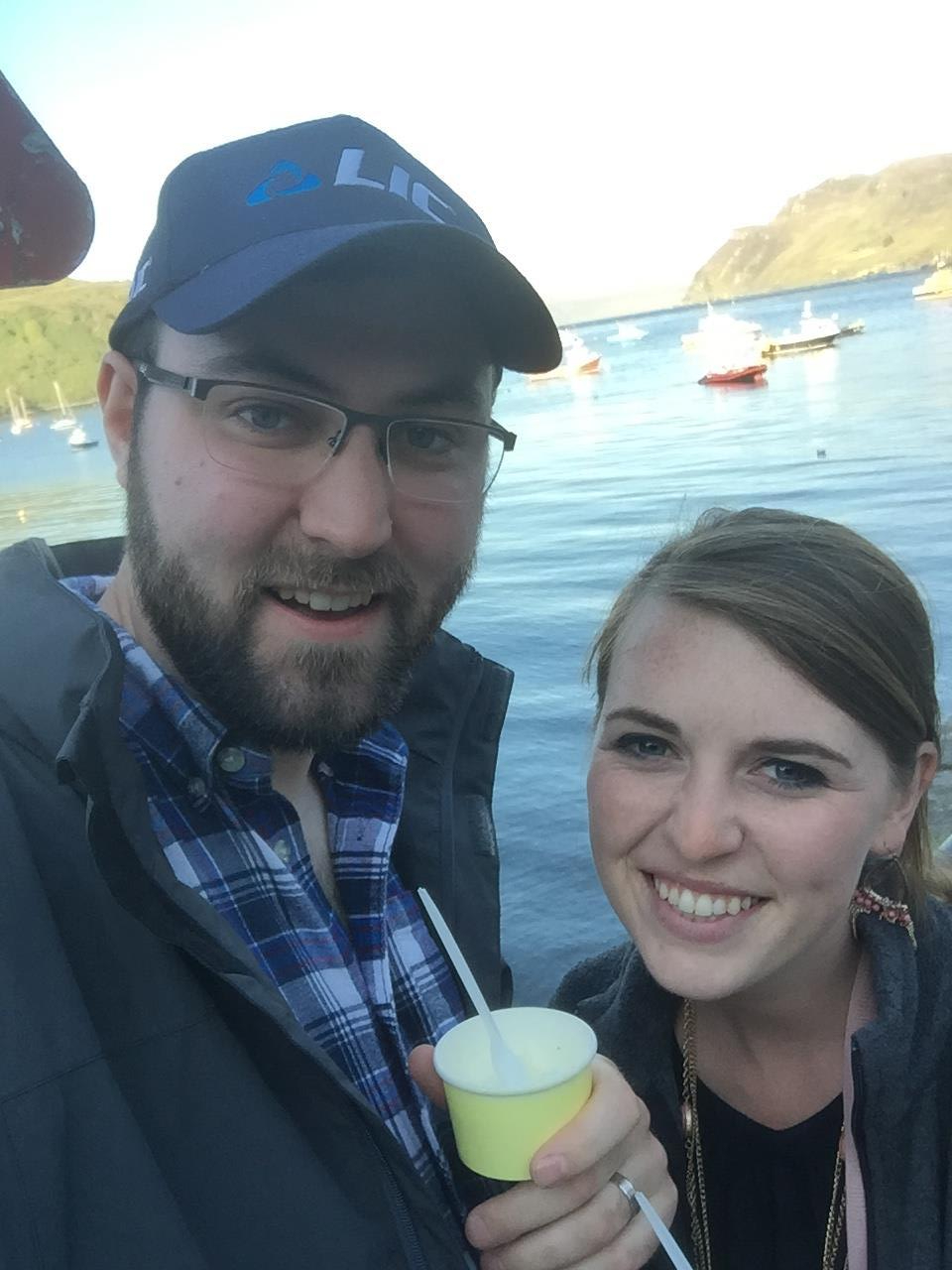 We retired for the night to dream of castles and Nessie, the Loch Ness Monster. 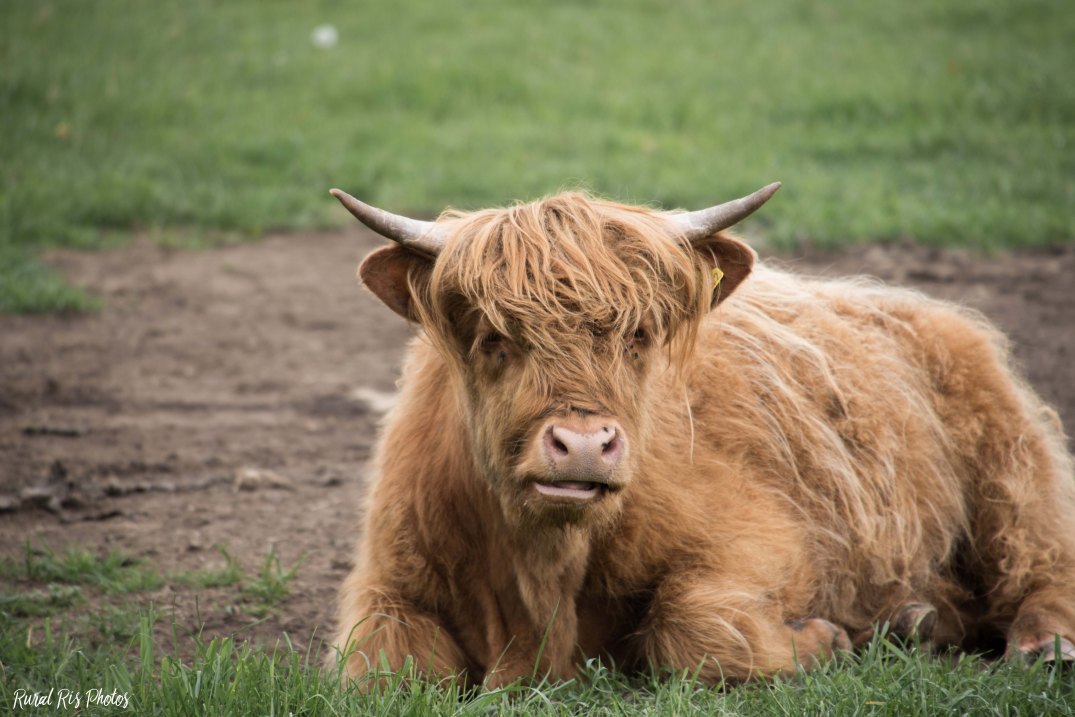 2 thoughts on “Honeymooning in Scotland–Day 5”